Greetings, all. Here is a photo 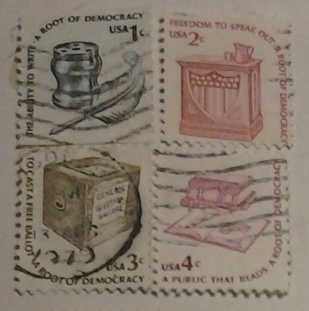 These stamps are from the Americana definitive series of 1975-6, celebrating the U.S. Bicentennial. I expect those of a certain age will remember them, at least vaguely. As you see from the arrangement, each sequence of four stamps combines a central iconic image and patriotic sayings around the margins. Four stamps of consecutive value placed together — say, the 1 cent, 2 cent, 3 cent and 4 cent values — form a circle of sayings, as it were. OK, more like a “rectangle” of sayings, but still pretty cool, eh? As you see here, these circles continue in f

our other stamp quartets in the Americana series, up to the top $5 value.  The sayings that circle round the stamps unite each quadrant, and the five quadrants form their own circle, united by their design and content.

Still with me? The reason I am sending you this now, decades after these stamps were issued, is that I have just figured out how to display them in a way that best brings out the special quality of the set’s design. Some
how through the years, I have appreciated the concept, but my stock book didn’t accommodate this kind of arrangement. This is not the standard way albums display stamps in a set, even printed on the page. Besides, my mint (uncancelled) other set is in plate blocks — four stamps from the corner of the sheet complete with the number of the sheet, or “plate” — that don’t fit together as a square.  I kept fiddling in my mind with the stamps  (OK, OK, I wasn’t obsessed; I’m talking about years going by). Even though the set’s inherent unity was realized only in my mind, it always has been one of my favorites. I even like the sayings. (Hey, I’m a patriot, too!)  I  kept an old column written for Knight-Ridder by Dominic Sama, explaining how the lettering on the stamps, designed by the Philadelphia graphic arts company Kramer, Miller, Lomden, Glassman, “was arranged along one side and around to the bottom or top of the stamp. With the block of four stamps, the combined lettering would form a circle.”

So now I have decided on the solution and taken action: I collected cancelled copies of the stamps from my stock book, grabbed an empty album page, and went to work with tongs and hinges, producing the result you see here. Neat, eh? Hello? You still there? (We stamp collectors are never really sure anyone is listening as we drone on …)

This is the kind of thing that has attracted me to philately for lo, these many years. I love seeing how sets of stamps fit together visually. Many sets of stamps are splendidly conceived, designed and executed — particularly engraved stamps. (These Americana stamps are engraved, meaning hand-drawn and etched.)

Stamp collecting includes a mercenary frisson to keep things interesting. While none of these Americana stamps is particularly valuable — you’d be lucky to get much more than face value for nice mint copies — certain stamps put out in the last 30 years now  command high prices. Generally, older stamps seem to be holding their value within their limited market.  Online auctions and shopping sites are booming — as is reflected in my own buying habits, as well as the lively bidding that frequently snatches away an  intended prize!

Stamps have historical heft as well as investment potential. Take this Americana set, which accompanied all the Bicentennial hoopla of that long-gone era. In 1975, the Vietnam War ended but the Cold War continued,, It was the year after Nixon resigned, a year of massacre and mayhem in Latin America, a year of horror in Cambodia … Against that backdrop, and having witnessed all that came after, it is both stirring and troubling to read the brave slogans and high aspirations emblazoned on these stamps — ‘“Freedom of conscience — an American right”   … “One nation indivisible — E pluribus unum” … “The land of the free and home of the brave” … .”America’s light leads her generations onward.”  It is poignant to reflect on the broader sense of unity and purpose embodied in these philatelic artifacts, created as this democratic republic entered its third century …