Welcome to my stamp collection. Here is the bulk of it, in these two lower shelves of a small bookcase in my study. The top shelf is reserved for catalogs. These books contain detailed listings of all the stamps and varieties I collect, along with their estimated value at the time. I use catalogs dating back to the 1970s  for classification purposes. For the old stamps I collect, they are just as reliable as the latest edition when it comes to illustration, number, description, watermark, notes and so on. To gauge the current value of stamps, it’s easy enough to go online  and find out  h
ow much a particular stamp is selling for at the moment.

The middle shelf holds my major albums. You can tell the British and British Colony stamps by  the distinctive Union Jack displayed at the top of the spines, left to right: British Africa (black dustcover), British America (blue dustcover) and British

Europe (red dust cover, or should I say, magenta?). One reason why I don’t store these albums next to each other is that the thinner albums immediately to the right of each one contain newer stamps (1960s on) from each area of the world, including the last colonial stamps as well as post-independence issues.

At the far left is my Congo album (blue spine), with a nearly complete collection of stamps dating back to the 1880s. Then come two more albums of African stamps — French colonies, Liberia, newer stamps from Congo, Rwanda and Burundi. In the middle of the shelf are my two American albums (brown spine, green spine); further to the right, after British Europe and modern British Europe, are general European stamps.

The lower shelf is a diverse lot: Germany, French West Africa (pre- and post-independence), miscellaneous stock books and files holding stamp sheets, miniature sheets and other multiples, as well as several books featuring stamps on covers from the USA and around the world.

Among this last group are “first day c 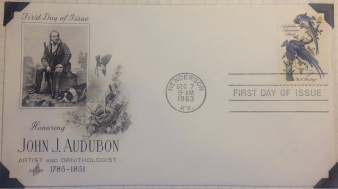 overs” like this one, with stamps placed on specially engraved envelopes and cancelled on the first day of issue. These covers were supposed to become collector’s items, but it hasn’t turned out that way, to the chagrin of first-day cover enthusiasts. Today FDCs are a glut on the market …

nvelopes sent through the mail before the advent of U.S. postage stamps in 1847 — for example, this one bearing a postmark of 1844 (see date in small type at left); another is from 1840. There are some  envelopes with early American stamps, others with Confederate stamps from the 1860s (see below). They may be worth something, but probably not much. … 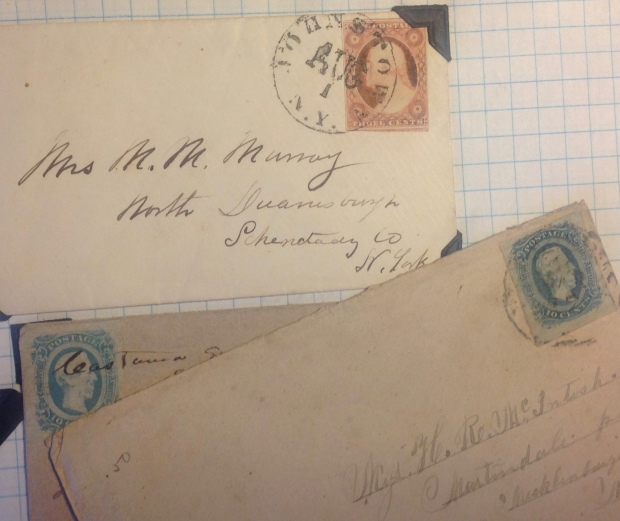 Another type of cover is the specially cancelled “first flight” envelope bearing an early airmail stamp. For example, this envelope was carried on the first stamped-mail flight from Miami (and Virgin Isla

nds?) to New York City on Jan. 9, 1929.  Some “first flight” covers are valuable. And romantic!  The rarest cover in my collection is one addressed to my Uncle Reddy, in Needham, Mass. (see below). It bears the 24-cent “Jenny” airmail stamp, cancelled with the message: “Air Mail Service; New York; Jun 3, 1918; First Trip.” A rubber stamp in the lower left corner of the envelope announces: “VIA Aeroplane Mail.” Quaint! While the envelope isn’t in particularly good shape, a similar cover was offered on eBay recently — for $250!

You do know the difference between a stamp album and a stock book, don’t you? Do I have to explain everything? Oh, all right. Take my American collection, which starts with a binder full of pages offering spaces for every major variety of U.S. stamp … from the first two in 1847 — the Benjamin Franklin 5-cent and the George Washington 10 cent — until the pages run out in the 1960s.  Beyond that date — now more than a half-century ago! — I have relied on stock book pages to hold my U.S. stamps. A typical stock book page has up to 10 plastic or parchment strips arrayed in parallel rows, Each strip is attached to the page at the sides and across the bottom, thus creating a secure holder for up to a half-dozen stamps inserted (using stamp tongs, of course!) across the width of the strip. Space out the stamps in your own design, or bunch them up for bulk or “stock” storage (hence the name “stock” book). I have numerous  small stock books loaded with duplicate stamps, many of them cancelled. You must take care when the stamps are uncancelled, or “mint.” Allow humidity into a room where mint stamps are stored on top of each other in stock books, and you could have a real sticky problem!

I would be hard-pressed to assign a total value to my current collection, though it is surely in the thousands. For one thing, the value keeps rising (I hope). Some rarities and nicer items in my collection, including U.S. stamps I bought at my local post office, have increased five- to tenfold over what I paid for them. I spend hundreds of dollars on stamps each year (wife Chris has been known to roll her eyes and sigh when she sees the billings).  I keep notes of how much I spend on dearer stamps ($2 apiece and up). The most I have spent yet f

or a stamp is $105, a princely sum which I paid in 2013 for Natal No. 1, 3 pence, rose, 1857 (pictured here, larger than actual size). The stamp has a catalog value over $500, but that is for a copy with four clear margins, whereas my copy has only three. I have no certificate of authenticity, and there are known to be reprints with bogus cancellations. Nevertheless, I am fairly certain this is the real deal. Now, if you’re just skimming over the album page, you might be tempted to dismiss this rarity. It looks like a smudged square of colored paper with some bumps on it. Look more closely, though, and you will see a clear impression saying “THREE PENCE,” much of it picked up by the bla 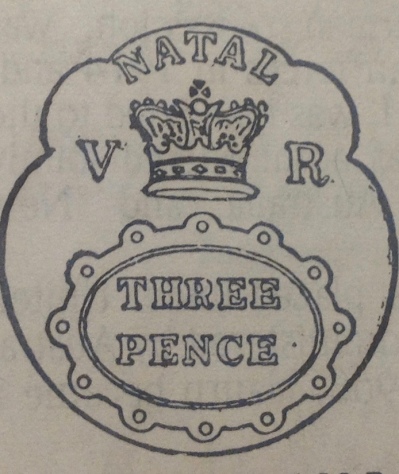 ck ink of the cancellation. Actually, the margins are unusually large for this variety: just in at the bottom, clear the rest of the way around. Compare the faint embossing on the stamp with the actual design outline, at right, as presented in the Scott stamp catalogue, and you may be able  to discern details on the original:: 1) as stated, the number is clear under the postal strike; 2) also visible are the circular border and the letter “A” from  Natal at top; 3) “V” is visible at left, and a faint “R” at right. Can you see it? Now think of this odd stamp, embossed  more than 150 years ago, placed on an envelope in the new south African colony of Natal for the outgoing mail. Now That stamp is in my collection. As you might suspect, I have examined this stamp in great detail, and confess to be being hypnotized in looking at it — something about the fleshy color, the tattoo-like embossing, the nearly hidden letters and symbols, then imagining this artifact making its way from that African  postal outpost back in 1857 …   philately just boggles the mind! 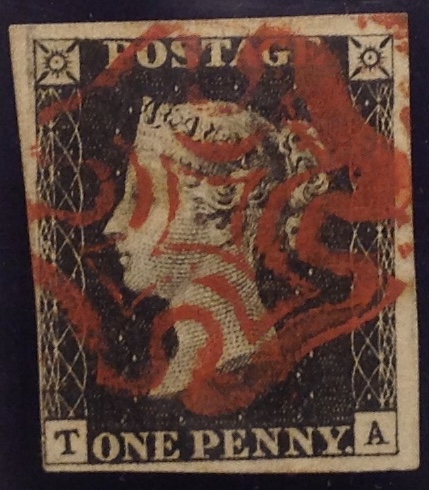 th you now  (more will be presented in future chapters) is the Penny Black from Great Britain. This is the First Stamp, issued in 1840, bearing the engraved profile of Queen Victoria. It was  produced by Sir Rowland Hill. This stamp cost me $70 in 1991. The Penny Black is not exceedingly rare, but very old. Mint copies (uncancelled) are expensive. But used examples with nice cancellations and four margins — that is, where you can see white all the way around the design — can bring hundreds. Mine has four margins, or so I claim. You may need a magnifying glass to discern the thin sliver of white that continues around the lower left of the stamp — but I maintain it is there! Thus I believe my stamp should be worth at least — $70!

Because Britain was the world’s first and only stamp-issuing nation in 1840, Sir Rowland was able to omit the name of his country from the Penny Black — an insouciant act of noblesse non-oblige. After all, there weren’t any stamps from any other country, so wasn’t it obvious? Because of this anomaly — or is it right of primacy? — Great Britain con
tinued to issue its stamps without a national designation, and continues the practice to this day, the only nation to do so. British postage stamps always include a likeness of the reigning monarch. But none of them says “Great Britain,” or “United Kingdom.” Indeed, when  the component parts of the UK started issuing their own stamps in 1958 — in Wales and Monmouthshire, Scotland and Northern Ireland — they bore only a portrait of Elizabeth

II and regional symbols; no names. Way back in the 1840s and 1850s, when other nations began issuing their own stamps, they had to include their names to distinguish themselves from each other — and from the Nameless One. One exception was Brazil, whose anonymous “bulls-eye” stamps came out in 1843. By the 1860s, however, that nation, too, had fallen in line and added “Brasil” to its stamps. The first two American postage stamps, issued in 1847 — the 5-cent Ben Franklin and the 10-cent George Washington — are inscribed “U” and “S” in the upper corners, and “Post Office” in between. Today’s “forever” st 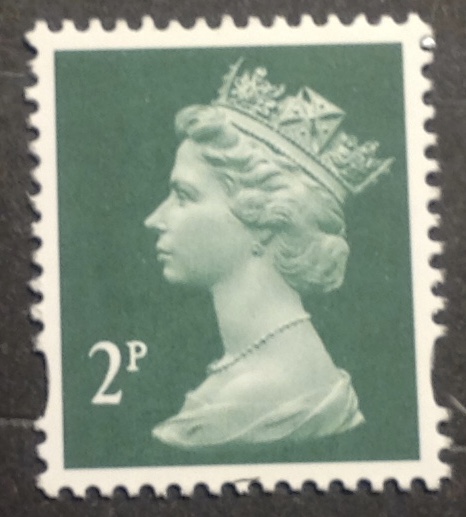 amps still include “USA,” while Great Britain’s regular issues include nothing but a value and an iconic portrait of Elizabeth II.

That portrait, by the way, is based on a
n elegantly sculpted profile of the queen, the work of Sir Arnold Machin. The first set of Machin definitives was released  in 1967. Machin definitives have continued to appear across a half-century, and the portrait of Queen Elizabeth II is the most familiar image in philatelic history.

Some day I or my designated agent will be able to add up all the price tags on the beauties I acquired over the years and arrive at a pretty good estimate of the value of  my investment. My fervent hope and belief is that philately will survive and thrive as a pleasurable hobby for collectors and connoisseurs, and that my stamps will continue to grow in actual value, so that one day they can be a great gift to my heirs …   Meanwhile, please come along on this meandering journey through the pages of my collection — the stamps and the stories  they tell …