Another recent foray into online stamp-buying cost me $99 bucks or so. The sellers were so on-the-ball that the packets started arriving within two mailing days.

Way to go! In following days, I received a delightful philatelic cascade of seven envelopes. As it happened, each letter  was from a different state:  Virginia, Washington, Tennessee, Ohio, Arizona, Illinois and Nevada. This was pure coincidence — I was not trying to set a record for sellers in different states, just trying to fill out my Bechuanaland and Somaliland collections. What does this diversity suggest? For one thing, that stamp-collecting is deeply embedded in the U.S. heartland. At least, a lot of folks with stamps they want to sell are living all over the country. Maybe they are selling off their stamp collections, or just having fun in retirement. Maybe some of them are still collecting — selling some stamps and buying others.  I received this poignant note from one seller: “Fred, Thank you for your order. Please keep checking. Every stamp I sell from my collection helps my family buy things we need to get by. May God bless you, Gregory.”

Philatelists are fortunate to have entered a new landscape of stamp collecting — accessible and enriching as never before — through the magical doors of the Internet. In the lively stamp-ing grounds of today you can pick up bargains, no matter whether you collect American, British Colonies, foreign, topical or other specialties.   You can bid boldly at auctions, haggle with sellers, systematically fill out your sets, even sell your duplicates. The Internet also provides virtually limitless opportunities for research and enjoyment of the hobby — its history, stories, and images both stirring and beautiful. It’s never been easier or more fun to collect stamps. What are you waiting for?

These buying sprees of mine have not been a regular thing — maybe once or twice, every couple of years. Perhaps there will be more such sprees, since I have to start cashing in my IRA after age 70 and 1/2. After all, it’s a good investment, right? Plus, it’s lots of fun!

Here’s how I handle my cache of new lots. First I slice the envelopes with my letter-opener, draw out the contents, spread them out on my desk and admire the  resulting philatelic clutter. I harvest the colorful stamps the sellers pasted on the envelopes for postage, and stash them in the large envelope I use for such accumulations.

Then I check the sellers’ manifests to see what is what and make sure I got the stamps I ordered. (This is when I discover today that in my haste, I’ve bought quite a few  duplicate stamps. Oops!)

Carefully, I update my want lists, crossing out the recorded catalog numbers of stamps I am adding to my collection..

Turning to my British Africa album (for Somaliland, Bechuanaland et al.), I mark an asterisk (*) in light pencil on each space to fill on the appropriate page, with a notation underneath of the year of purchase and the price (if over $2.50).

When I’m done, I am free to discard the paperwork and rearrange the new stamps as I choose. The resulting stock cards turn out to be quite pleasing to  the eye —

These stamps from Somaliland Protectorate (above) span the reigns of two kings — Edward VII and George V — and are from three sets, including one with a change of watermark. Don’t they make a pleasing view with their restful colors? The 12 anna (upper right) is described as “ocher and black”; the 2 anna (lower left) is “red violet and dull violet”; the 3 anna to the right is “gray-green and violet-brown.” Such delicious colors! You may notice I picked up two copies of the Edward VIII 1 anna stamp. The cancelled one didn’t cost much, but then why buy the mint one for $3.50? Hmmm. Looks like FMF got a bit careless in his buying spree…

seven early stamps from Somaliland Protectorate, a whopping 16 stamps for my Bechuanaland collection, and attractive items from Sierra Leone and Tristan da Cunha.

The final step, of course, is to “paste” the stamps into my British Africa album, using either stamp hinges (for low-value used 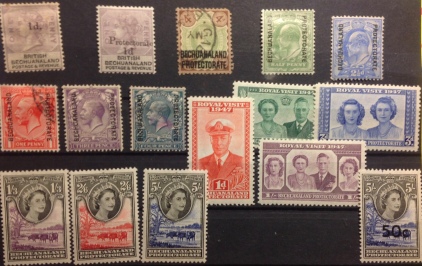 These stamps (above) offer a mini-history lesson. Here goes: Top left is a Victorian stamp of the 1880s, when British Bechuanaland was carved out of the Bechanaland Protectorate. British Bechuanaland eventually became part of South Africa, but Bechuanaland Protectorate continued until independence in 1966, when it became Botswana. You see here a succession of Bechuanaland Protectorate stamps featuring Victoria, Edward Vii, George V and beyond. There is a set (cheap) marking the Royal Visit in 1947, featuring a tired-looking George VI and a radiant young Elizabeth, still six years away from becoming queen. Finally there is a trio of high value Elizabeth II definitives from the 1950s (not cheap!) that completes a set for me. To the right is a high-value decimal surcharge that signaled the onset of the 1960s.

stamps) or black protective  mounts (for unused or higher-value stamps.)

As I contemplate these desirable additions to my collection, I suddenly am struck by the way the vectors of the senders in all those various states converge on my desk, in my house just outside of Syracuse. With two or three lots coming from some senders, up to a half-dozen stamps from others, these mailings produce

I confess: these stamps (above) have nothing to do with filling out my Somaliland or Bechuanaland collections. They just kind of hopped into my basket as I wanderled through the philatelic phorest. If you must know, I’ve been trying like the dickens to add to a handsome 1932 pictorial set of George V from Sierra Leone (top left stamp), with little success; indeed, I think I paid more than $3 for this one @##$%$ stamp! The Tristan da Cunha definitives from the 1950s were much cheaper — and aren’t they gorgeous two-color engravings? Notwithstanding their shortcomings as imperialist oppressors, colonial administrators were at their best when they issued beautiful stamps like these. Oh, and the Red Cross Centenary stamps at the bottom are part of an “omnibus” issue, which means all the colonies put them out. We collectors are left dutifully to accumulate these virtually identical stamps, most of them moderately priced, from all over the empire and place them in their designated spaces in our stamp albums. Hmmm. Did I ever tell you that stamp collecting is completely rational in all its aspects? I don’t believe so.

an exotic, colorful jumble.  Once organized and displayed on stock cards, however,  you find seven Somaliland Protectorate stamps, harmoniously designed and colored, arranged in two orderly rows. On a separate stock card, a small collection of 16 Bechuanaland stamps chronicles a mini-history of the British territory, from Victorian times to the decimal era of the pre-indepen-

Oops! I inadvertently bought all these duplicate stamps during my recent spree. One of them is quite pricey! I must be more careful. I feel like a whale that sucked in too many sardines. I suppose I could return them for a refund. But why bother, for the ten bucks or so they cost? Better idea: put price tags on the stamps to remember what I paid for them, and try to recoup my costs at the next meeting of the Syracuse Stamp Club!

You could plot a line on a map to the return address on each seller’s envelope — Washington State, Virginia, Ohio, Arizona — and produce  a pinwheel pattern of no discernible significance. Yet the stamps, once placed in order on the stock cards, unite to convey a coherent and resonant sense of unity, history and artistry.