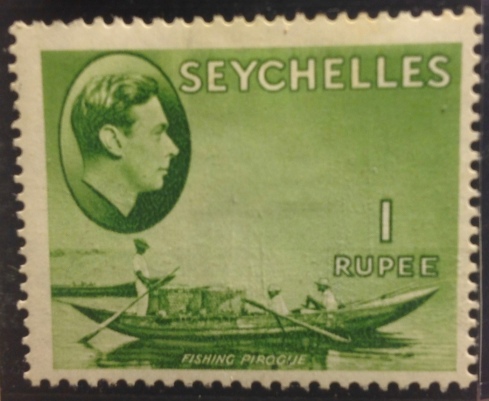 What a dull-looking stamp!

That may well be your reaction on contemplating the example included here. I hope the digital image does justice to just how ordinary this stamp looks: It consists of a photograph of three men in a non-motorized boat — sort of a mini-barge/gondola/fishing conveyance, presumably native to the Seychelles. The name of the British colony appears on the stamp, along with the value, 1 rupee, and in tiny letters below, “fishing pirogue.” Above left, enclosed in a small oval, is a profile portrait of Britain’s King George VI. Particularly noteworthy — or rather, NOT noteworthy — is the color, a kind of sallow pea-green, of noxious  tone, with a washed-out quality. The Scott catalogue describes the hue  as “yellow green.” Whoever picked this color should have been brought up on charges before the Board of Philatelic Aesthetics, summarily convicted of seditious — or at least, sulfurous — stamp-making and sentenced to Philatelic Purgatory.

Let me quickly add that I checked with wife Chris before making this online purchase —  after all, we are retirees, living on a fixed income. I can say as much as I like about stamp collecting being an investment, wise or not. Safe to say, when you spend $40 for a postage stamp, that money isn’t going to pay any bills, or cover other necessary expenses. But Chris was feeling indulgent  — after all, I had checked with her — and she didn’t put up a fuss; just rolled her eyes and sighed.

The letter arrived — from Paris, France, as fate would have it. “Here are your stamps,” wrote Renaud de Montbas (pecheurdetimbres). “I hope  you’ll enjoy them … as I put all my passion in my lots …”  I hope to figure out how to give M. de Montbas a good rating, since not only did this self-described  “fisher of stamps” send me my stamp quickly, he also covered the envelope with beautiful French stamps I could add to my collection.

And the stamp itself — what a prize! Let me explain:

Some of the rarest and choicest postage stamps are not particularly attractive — like the 1857 British Guiana stamp, the world’s greatest philatelic rarity. What makes stamps rare could be any number of things, resulting in their scarcity and desirability to collectors. This Seychelles stamp isn’t really that rare. It’s not extremely old, dating to a set issued in 1938, soon after George VI took the throne and became titular ruler of the colony.  I could speculate that one reason this stamp is rare is that it is so homely — but I won’t. I will make some related observations, however:

I. This 1938 set of stamps was a radical departure from the staid tradition of postage stamps from the Seychelles, an island group in the Indian Ocean miles from Madagascar,

Here are samples of Seychelles stamps through the years, starting with the 1890s set, top, featuring Queen Victoria; to the left are stamps of the Edward VII era (1902-1911). Below are stamps featuring George V (1911-1935). Notice the difference between the top and bottom George V stamps? It’s the side inscriptions — on the top stamps, they read “Postage/Postage” on both sides (who knows why the redundancy?), while the bottom stamps are inscribed with the more sensible “Postage/& Revenue.” Other subtle changes: the lettering below is white on a dark background; and the frame is crimped, not round.

the African coast, Mauritius or anywhere else. The first colonial stamps date back to a design used in many colonies that depicted a   profile bust of Queen Victoria. Essentially the same design — different busts — was used for King Edward stamps, then King George V stamps — across four decades. 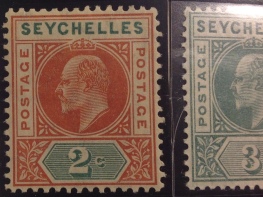 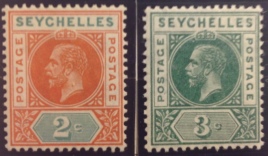 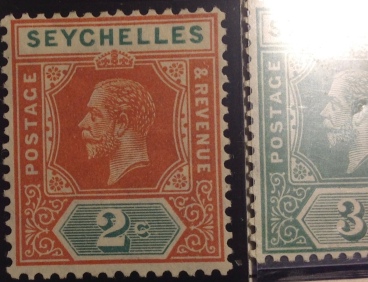 II. Seychelles letter-writers must have been mildly thunderstruck in 1938 when their stamps suddenly began featuring vivid photographic vignettes of home.  Giant tortoises! Coco-de-mer palms! Fishing pirogues! To collectors, these were exotic scenes from a faraway island, unfolding under the steady, benign gaze of the handsome, well-groomed young British monarch. After 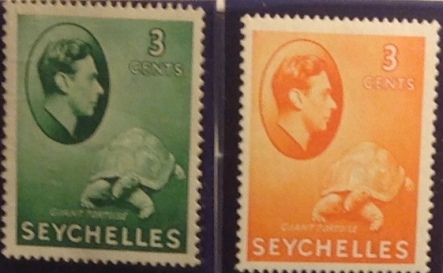 so many years of the same design, now there was something new!  One wonders: If the purpose of maintaining the design was in part to convey a sense of the British empire’s soliditiy, continuity, normalcy and orderliness, then what did the radical departure into gaudy labels in 1938 signify?

This shift in the  philatelic paradigm surely was a signal — unconscious, perhaps — that the colonial era was no longer going to be quite so predictable … 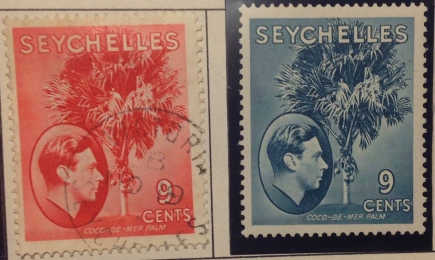 III. What a lot of stamps there are  in this set! Between the 2-cent stamp and the 5-rupee value I count 24 varieties — considerably more than the average for the first George VI set in other colonies. (Though I must add that right from the beginning, Seychelles did issue more long sets with color varieties

than most colonies; please don’t ask me why. Mauritius, an island colony a mere 1,000+ miles away in the Indian Ocean, also seemed to issue long sets — 20 stamps or more, 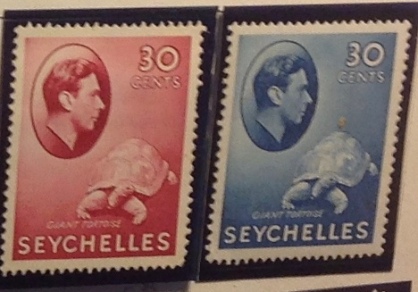 with different colors. Go figure.)  Over the past 18 years I managed to accumulate a nearly complete Seychelles 1938 George VI set, which is  tantalizing for a diehard collector/investor like me. But an affordable 1 rupee yellow-green eluded me — until now. Believe it or not, 37.99 euros is actually a great price for a decent copy of the stamp — 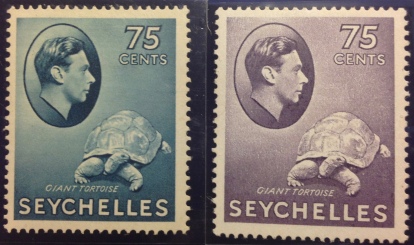 even a hinged one, like this. Other prices online ranged up  past $50, much higher for a never-hinged example. To have the set complete is a special pleasure of stamp-collecting — particularly if it results from a process of patient accumulation over time.

IV. Why so many stamps in this set?  It seems many denominations appear on two stamps, of differing colors. The first stamps, issued in 1938, are rarer than the second set that appeared in 1941. Particularly valuable is the 75-cent gray-blue, which commands prices 75 times higher than its dull violet successor.

V. The 1 rupee yellow-green could be considered the key value of the set. It is about 100 times more valuable than the 1 rupee gray that took its place in 1941. At least, I figure that’s what happened — all these earlier values were withdrawn, or at least no longer produced,  after just three years. The relatively short circulation lifespan of those earlier stamps no doubt helped to account for their subsequent rarity and inflated value.

The remaining set stayed in circulation from 1941 on, until a new set appeared in March 1952, featuring a portrait of a shockingly aged George VI. (Unfortunately, the king had died a month

earlier; the resourceful stamp makers simply replaced the portrait of George VI with a cameo of the young Queen Elizabeth II and issued that set in 1954; notice how the stamp-makers kept the same gray-and-white coloring for the 1-rupee stamp right on through. More sets followed; the Seychelles gained independence in 1976.)

VI. Why so many color changes in the 1938 set? Though I don’t know the answer, I’m always willing to speculate. One thought is that in 1941, the exigencies of wartime made it impractical or wasteful to use some inks rather than others. (This theory is not perfect, however; just check above to see the nearly similar color of the 1938 6-cent and the 1941 20-cent. What gives?)

I have another theory as well. I like to think that the colonial philatelic poobahs back in Whitehall decided the original colors were just too god-awful — starting with that 1 rupee pea-green number. Come on, chaps, we can do better than that. How about just a dignified, gray-and-white 1 rupee? That’s the ticket! 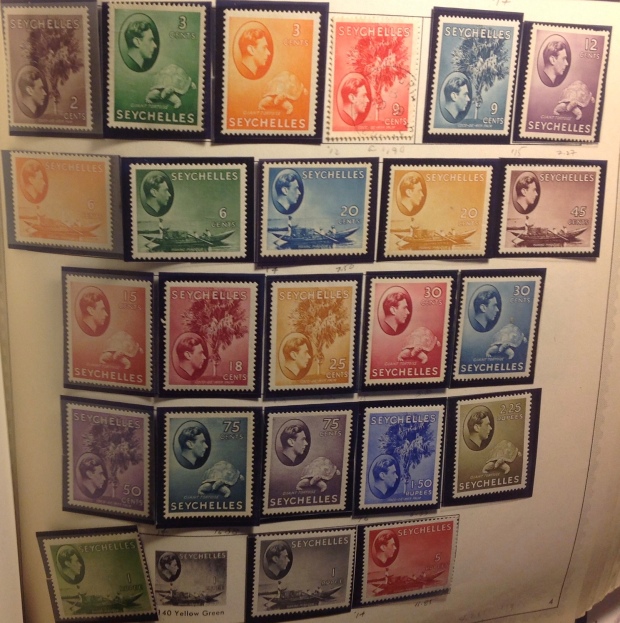 Here at the end is an illustration of stamp-collector’s delight — adding the elusive “key value” that completes a set. On the left, the missing stamp sits next to its designated spot on the appropriate page of the Minkus British Africa album, clearly illustrated with a black-and-white likeness of the missing stamp. Below, the set is complete! According to my research, a complete set like this — all mint except for the nine cent — is selling in the neighborhood of $200, with a catalogue value in excess of $300. Wowza! 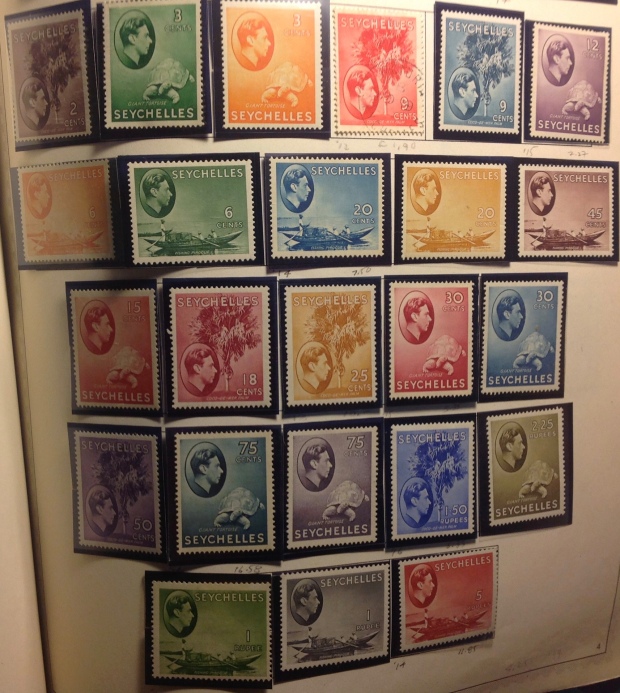