Stamp collectors know that theirs is not an intensely social hobby. True, there are stamp clubs, stamp shows, exhibitions and visits to the post office. Trading stamps — one of the most basic pastimes of philatelists — necessarily requires that you have at least one counterpart to haggle and bargain and carry on with. Yet much of the time it’s just you and your stamps.

Sorting stamps, arranging stamps, mounting stamps, reviewing them with pleasure and satisfaction in their colorful, orderly, venerable rows — all these are by nature solitary activities that can be pursued happily under quarantine.  Today’s stamp collector who is active in the thrilling world of online sales and auctions, is also pursuing this pleasure all by himself (or herself). Yes, you are negotiating with a dealer or private seller, but usually at a safe remove — across the country or somewhere else in the world. When the envelopes containing stamps arrive in your mailbox, you are pretty much on your own in admiring the thick little packages,

Just look at the selection of collectible stamps arrayed on both sides of this envelope one seller mailed to me in April.

often festooned with an exotic array of fractional postage stamps affixed by playful or well-supplied dealers and sellers. Certainly my spouse has no interest in this mail, or in any other aspect of my hobby really. Most of the time she tolerantly leaves me alone to indulge my 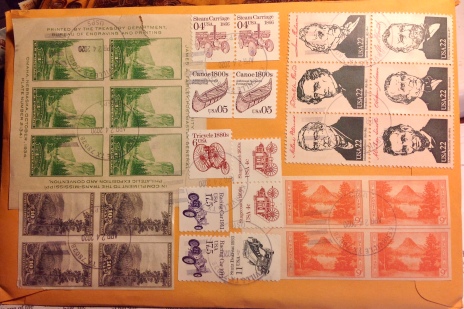 philatelic proclivities, only occasionally sighing or intervening when my spending habits start to deplete the family treasury.

For these reasons, there is no reason why something as terrifying, isolating and bothersome as a Covid19 epidemic should interfere with a stamp collector’s happy hobby.

Sure, I miss my biweekly meetings of the Syracuse Stamp Club in the basement of the Reformed Church. I miss the diverse lot of stamp collectors who show up with their quirky personalities, peculiar collecting habits, interesting stories, strong opinions, good humor, enlightening programs and intriguing stamps to sell or trade. Our monthly auctions are exciting to collectors like myself. You can pick up some unbelievable bargains, often for no more than “a buck.”  I look forward to the resumption of club meetings.

Recently Larry, our club VP, invited members to write short essays on “How I Spent My Covid19 Vacation,” with particular emphasis on stamps. It’s a fun idea, and it was the spark that ignited this little essay. I’ve also been thinking of other ways to stay engaged with the stamp club. For example, how about a Zoom meeting where one or more of us sits in our study, displaying prized stamps from our collections? It’s something we can do in this time of isolation that we normally wouldn’t when gathered together as a group.  Maybe we can save that one for the next epidemic.

Family expenses of late have limited the discretionary cash available to spend on stamps. That changed after wife Chris and I received our double dose of Covid stimulus checks, or whatever they are called. The sudden influx of $2,400 was quite a windfall, particularly since we retirees weren’t in financial need. After making large donations to the Central New York Food Bank and our church’s Ministerial Discretionary Fund, there was still plenty left for me to satisfy my  philatelic phishing impulses. So I cast out my line into the cyber-sea  and came up with some beauties.

As my intimates know, I maintain a stamp blog with monthly posts that I hope are of interest to the general reader, not just the avid or casual philatelist. (To sample the blog, search “FMF Stamp Project.”)  By the way, the blog is another solitary activity unaffected by the epidemic. As I compose my monthly posts, which generally touch on stories about my own collection, I use them as an excuse to scan the online market for stamps to fill gaps in sets that are under review. Lately I have enriched my Natal and Transvaal collections as I explore the postal history of southern, eastern and central British Africa. As I shop and buy online, one thing leads to another and my attention inevitably wanders to  stamps from other countries, usually early British Africa, Europe or America.

Today, for example, three envelopes greeted me in the mailbox — from Arizona, Virginia and Washington State. Oh joy! They contained 19th century,  Victorian-era

Here are two of the envelopes I received today, along with the contents of a third, already opened.

stamps from St. Christopher, Grenada, St. Vincent, Trinidad, and Trinidad and Tobago. The task of opening the envelopes, examining, sorting and arranging the stamps, mounting them in my album, filling gaps , adding appropriate notations, is a delicious prospect indeed — not dependent on either the presence or absence of Covid19.

As you can see here, I have gotten as far as arranging my precious new acquisitions on a stock card. Some of the stamps date back to the 1860s. I paid $70 to three sellers for all of them.

Some might raise the question of viral risk concerning these envelopes arriving from all over.  Could they be contaminated? To which I reply: not bloody likely. Though there are lugubrious guidelines about how long the virus can survive on paper, plastic and the rest, I have never heard of anyone contracting the virus from handling stamps. Until I hear otherwise, I’m not worrying about it. Aren’t there enough other things to worry about? ** 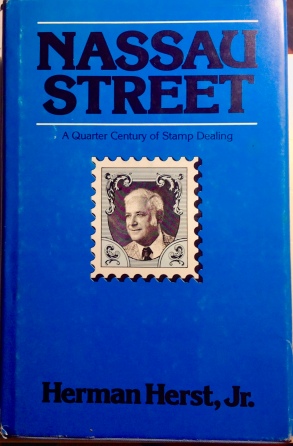 Quarter Century of Stamp Dealing,” by Herman Herst Jr. One copy was a signed first edition, the other a standard hardcover reprint. (I think George   just wanted to get them out of the house.) I started reading, and it’s quite an eye-opener. (Hey — this is something else you can do during the Covid19 shutdown: read about stamps!)  While I haven’t gotten very far, I would like to share a glimpse of the high-energy world that stamp collecting used to be. In the mid-1930s, the Stamp Center Building at 116 Nassau St. in Manhattan housed 40 stamp dealers. That didn’t include other dealers ranged up and down the block. I remember my old Pa, an enthusiastic collector, loved making solo side trips to “Nassau Street” during our infrequent family visits to New York City in the 1950s. I was too young to get much exposure to that zesty, colorful arena of stamp collecting in its heyday.  I do remember, however, a couple of visits to Gimbel’s department store in the 1960s, where I mooned over the displays at the stamp counter.

There were stamp magazines of many varieties starting in the 1930s — Mekeel’s, Philatelic Gossip, Linn’s, Stamps, International Stamp Review, Stamp News, Kaw Chief Stamp Journal, Chambers Stamp Journal, Stamp Land. “It seemed that everyone who ever collected stamps and had a printing press was publishing a stamp magazine,” Herst wrote. One of them, Western Stamp Collecting, became so popular it started publishing twice a week, up to 16 broadsheet pages, “and in the process developed the largest circulation a newspaper had ever experienced,” Herst claimed.

Stamp clubs, back then, were wildly popular. “Every night in the week you could attend a stamp club in New York,” wrote Herst. “Each week The Sun would chronicle the founding of a new club. … The Bronx County Stamp Club was the largest club of all. Seldom did less than 150 members show up for a meeting. It occupied extensive rented quarters in Vasa Temple, a lodge meeting hall, at 149th Street and Third Avenue in the Bronx. It is safe to say that nowhere in the stamp world was more business transacted in a three-hour period than at the Bronx Club. …”

Those were the days, eh? Stamp collecting sounds like quite a sport back then, doesn’t it? Very different from the rather moribund affair of today. Imagine what Covid19 would have done to the strenuously interactive stamp business of the 1930s!

Philately may be a comparatively quiet enterprise today, but it is not extinct. As stamp collectors know, the Internet has infused new life into the hobby,  stabilizing values and stimulating demand. The future may not bring a return to the halcyon days of “Nassau Street,” but at least there is a future. Because of  the nature of philately, there is no reason to fear that the current Covid19 unpleasantness will change any of that.

** NOTE: Regarding contamination and stamps, this email arrived in my box today from a stamp dealer, who is either from the Philippines or has many customers living there, under the heading, “Corona Virus and Philippine Post”:

Dear customer,  …  I know some of you have received some orders but not all. I was talking to our Post Office staff again yesterday when I delivered the recent orders for mailing. They advised that Philippine Post is not processing international mail again — no reason given. This is all very frustrating for you I realise and I thank you for your patience.  Your orders will arrive eventually. …

2 thoughts on “BONUS: Stamp collecting during the Covid19 shutdown, or: Philatelic phun in the pandemic”