If you have paid close attention to my stamp blog, you know I have a nice copy of Great Britain No. 1 — the world’s first postage stamp, also known as the Penny Black. (see right)

Look at the second row of spaces in the illustration at right, though — empty spaces. Those are Nos. 5 to 7 — actually Nos. 7 to 5, since the one shilling value was issued first, in 1847, which coincided with the first U.S. postage stamp. In 1848 came the 10d. value, and finally, in 1854, the 6d. What sets these three stamps apart from nearly all other UK stamps — is that they are embossed labels. They look like what later were known as envelope stamps, which you still find at post offices around the world, including the USA. More on that later.

Year after year, as I accumulated a respectable GB stamp collection, those three early spaces yawned at me in my British Europe album. (OK, you notice I don’t have expensive No. 2, either, but that’s another matter.)  From what little I knew, those three “stamps” — Nos. 5, 6 and 7 — also were pretty costly … valuable, rare. Not having much ready cash to spend on stamps, I figured they were out of reach. Plus, they somehow didn’t even look quite like stamps …

Then I discovered that when an embossed stamp like these, or an envelope stamp or a multi-sided imperforate stamp, is “cut to shape,” so to speak, rather than saved as a rectangle or square, there often is a dramatic drop in value. A cut-to-shape stamp usually is practically worthless, or worth comparatively little, according to the traditions of  stamp valuation.

Take, for example, this early two-color British India stamp of 1854, featuring an imperforate octagonal frame with a portrait of Queen Victoria (right, from the Internet). A nice copy like this pretty stamp (grabbed from the Internet) will sell for up to $450.

Just for kicks, I include an image of a rarity (below left): the 4-anna stamp with the portrait inverted. Even though the stamp is cut-to-shape, it’s still priced at more than $35k. 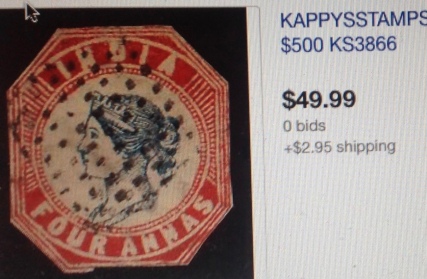 Here is an example, from the Internet, of the 4-anna stamp, cut to shape. It’s not cheap, but much below the cost of a rectangle. Get my point?

My quest for a copy of Great Britain No. 5, 6 and/or 7 was stimulated by an online offering I stumbled across. Before I tell that tale, however, let me just meander into the inviting field of cut-to-shape stamps …

For starters, take a look at this beauty (right). It’s the famous British Guiana one-cent black-on-magenta, a fabled one-of-a-kind variety. And as you’ll notice, it’s cut to shape. That doesn’t prevent it being sold and re-sold, every now and then, for millions.

Below is an example from the Internet of an early embossed stamp that carries a hefty price tag, despite being cut to shape.

More common are examples like these, also from the Internet. Notice the relatively low price for these ancient embossed beauties. They’d be worth a lot

more if they were not cut to shape.

Please allow me to take this opportunity and share some of the embossed envelope stamps in my own collection. Below you will see a hodgepodge to start things off. Notice how many are carefully cut as rectangles — though I don’t believe any of them are worth much.

Whatever value the medallion-shaped oddment here had was decimated by the lame-brained stamp fiend who cut it to shape. (Was it a younger me?)

This is a cute enough collection, and they’re all nice rectangles. Not worth much, though. 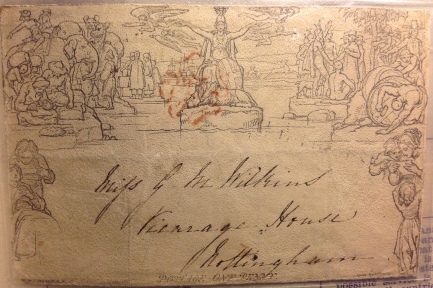 As I segue back to my quest for those early GB embossed stamps, I offer this: the world’s first “envelope stamp.” It’s from 1840 in Great Britain, and it’s known as the Mulready Cover — a one-penny foldable sheet you could write on, seal up and send through the mail. The idea never caught on. (This nice example is from my collection; I expect it’s worth at least the

$40 I paid for it.)  Here are two modern envelope stamps. At left is a clever retro design, harking back to those illustrated above. To the right is

some kind of holographic horror representing the space program or something like that.

The images above and below put the cut-to-shape issue in sharp perspective. Above is GB No. 5, the one shilling value — admittedly a magnificent example,  mint with original gum, offered on the Internet for nearly $6k. Below is the same stamp — heavily cancelled, clumsily cut to shape — offered for $1.99.

It’s fun to look at nice examples of these early beauties, even though they are   beyond the means of this modest collector.

It was growing clear to me that if I ever wanted to fill those empty spaces in my album, I would have to settle for cut-to-shape. But I didn’t just want a “space-filler,” a crudely mangled example that is essentially worthless. Over the years, the Scott catalogue has upgraded its price for Nos. 5-7, cut to

shape, from $1.50 to $10 or so. I searched the Internet and began finding cut-to-shape offerings that were well within my price range. There were flaws, though. 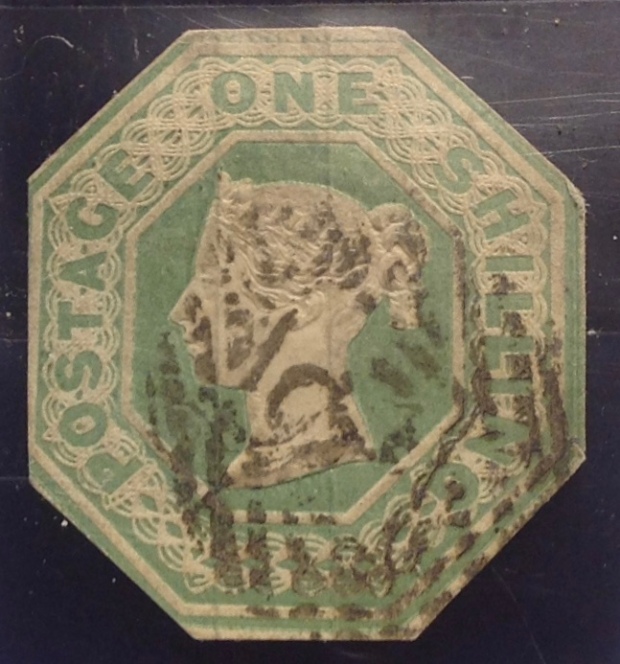 Finally I came across this cute little item: No. 5, carefully cut to shape, including nearly the entire design; no thins, tears or creases; offered for sale at $14.99.

In the miraculous global stamp marketplace of the Internet, I transacted my business and the long-sought collectible arrived in my mailbox a few days later.

All that remains is to share with you the pleasure of filling one of those spaces in my album. Philately phorever! 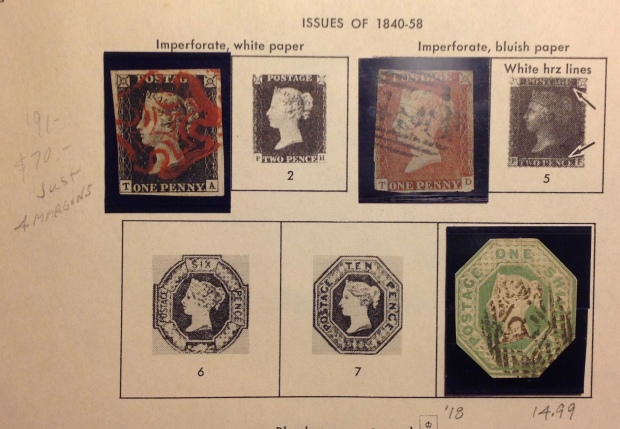