Do you think it was magnanimous of the British to grant “internal self government” to its Bechuanaland territory in 1965  (see the commemorate set of stamps, above)? What’s that? Oh, you say the Tswana tribe of Bechuanaland had been self-governing all along? And the British handled — what? Foreign affairs? Kept Bechuanaland Protectorate from turning communist? How about extraction of resources and exploitation of labor? For whatever reasons, including sheer stubborn imperial pride, the British did not grant independence to Bechuanaland until 1966, long after most of colonial Africa disappeared. A year earlier, the territory issued its final set under British dominion — this odd duck you see above, where the word “protectorate” has been dropped. Why? Was Britain withdrawing its “protection”? Was Britain still handling foreign affairs for the Tswana? Should I stop asking questions for a while? 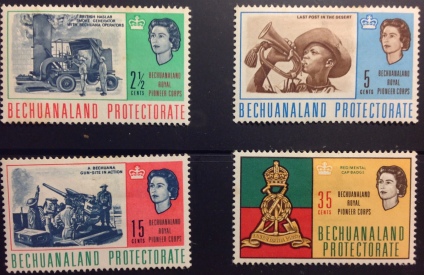 Then an odd little set came out June 1, 1966, commemorating the Bechuanaland Pioneers and Gunners. These were African “recruits” in World War II, as many as 10,000 Tswana in all. Some volunteered, others were pressed into service as laborers, anti-aircraft gunners and drivers. African troops traveled as far as Italy and Lebanon. This set marked the 25th anniversary of the Bechuanaland pioneers, formed in 1941 and disbanded in 1946. The designs include a British Hasler smoke generator truck with Bechuana operators, and a  Bechuana gun-site team in action. There is a depiction of the regimental cap badge (rifle and spade crossed under the crown, with the insignia “Labor Omnia Vincit,” which I would translate as “work conquers all.”) The five-cent stamp features a handsome young Bechuana pioneer bugler, his wide-brimmed military bush cap giving him a rakish look. It was said that many of the Tswana recruits adjusted well to military service — even under the command of white officers. One wonders how well they adjusted back to colonial life. The role of World War II in stirring nationalist aspirations in Africa and elsewhere is well-known. While some Bechuanaland Pioneers and Gunners were victims of a colonial enterprise, others eagerly  served the war effort and made genuine sacrifices.  The experience of being in that group may have helped nurture and train a generation of African leaders.  These stamps provide a suitably ambivalent coda as the last set issued by Bechuanaland Protectorate.

Three months later, a new nation was born — philatelically speaking. The first set from independent Botswana was issued Sept. 30, 1966, and was clearly a rush job: Instead of designing new stamps for the new country, postal authorities simply overprinted the 1962 definitive set with “Republic of Botswana.” OK, so it looks kind of weird to have Queen Elizabeth smiling out from under the overprint. But hey, the stamps are valid enough. Lots of emancipated colonies did the same thing, starting with Ghana, which overprinted the Gold Coast set of Queen Elizabeth definitives in 1956.

Above is the first definitive set designed specifically for Botswana. An earlier  commemorative set, issued Sept. 30 (the same day as the set of overprints) marked Botswana Independence Day. I have always been partial to definitive sets. Why? Because they are stamps people actually use, not labels commemorating one thing or another that may not even get to post offices for use on regular mail. Definitive stamps are the People’s Stamps!  I acquired Botswana’s first definitive series as a first-day cover, evidently cancelled-to-order because there is no address on the envelope. In addition to 14 colorful birds on the stamps, the  envelope has snapshots of native animals, like an elephant on the move and a fat, shiny hippo.

At right is a display in my stock album of stamps from several  subsequent definitive sets of Botswana, all featuring native fauna. I accumulate these stamps without much energy or

intent— when they come my way, I take them. I still enjoy putting sets together, noticing common features as well as the obvious and subtle differences. Somehow, it just makes life sweeter.

I must pass along a blow-up of this unusual Botswana commemorative from 1975. It celebrates the 90th anniversary of the  “establishment of protectorate.” The set includes two other stamps, one depicting tribal chiefs, another recording the chiefs’ visit to London in 1895.

This map stamp  has got me scratching my head, though. First of all, why even make special mention of this colonial map-making in newly independent Botswana? So the British extended
“protection” to Bechuanaland. Big deal. It was little more than “protection” from the encroaching Boers and Germans. Oh yes, and protection from rival tribes in Matabeleland. This was no act of statesmanship and enlightened geopolitics. The British were motivated by greed and racism, along with the other colonial powers. A second puzzle: If you are going to honor such a colonial gesture, why not wait until the centennial, instead of the “90th anniversary”? That would seem a more resonant temporal landmark. Why the rush? A third puzzle involves the map itself, with the land labeled  “British Bechuanaland,” not “Bechuanaland Protectorate.” After 1885, British Bechuanaland was gouged out of territory south of the Molopo River, which eventually became part of South Africa. The bulk of Bechuanaland became the protectorate, more or less on the outline of modern-day Botswana. What this means is that the stamp honoring the protectorate actually portrays the status quo ante — what things looked like before there was a protectorate. What sort of sense does that make?

Above is what we in the philately racket call a “hodge-podge.” It’s a catch-all page in my stock album for post-colonial Africa, my last page for Botswana. You will see some attractive animal stamps, and a crudely-drawn portrait of two nearly naked  children (boys?) standing awkwardly, as though waiting for a bus — or more clothes. Center right is a stamp with a striking landscape of plain and dry hillock set starkly against a blue sky. (Too bad the stamp has a crease in it!)

The set at lower left above (enlarged at right) commemorates a century of Bechuanaland stamps, carrying us back to where we began.  You can read much more about this set — and the stories the stamps tell — in my blog post of April 2018, Bechuanaland: Introduction. That is where my exploration of Bechuanaland/Botswana and its stamps began.

We have come a long way, with some detours, and for me it has been a pleasure. I am thrilled to have been able to devote so much time and attention to my beloved Bechuanaland stamps, and share it all with you. While I hope to add more stamps to my Bechuanaland collection, now it’s time to turn the page and embark on new adventures. There is much more ahead — more stamps, more stories, more illustrations and speculations — more drama and fun!  Onward!