Here are images of me, unsmiling, displaying what appear to be various expressions of discomfort, even dismay. These images are appropriate for the essay that follows, which tells a couple of distressing stories of the misadventures that can befall the active philatelist. I wrote this a couple of years ago, so the dates are of interest primarily for chronology. For the gory details, read on …

I’ve been smarting from a recent philatelic setback: I paid $30.60 for an order from Stamps2Go. The seller, Du Wei, is from China. I filed my initial inquiry/complaint through the Web site three weeks after the order supposedly was mailed, and received in response this mild rebuff:

“Hi, Your items were shipped out Oct. 9th (China time) … Mails to US usually take about 2-3 weeks but sometimes it would be longer. No problem so far. Believe you will get it soon.
“Please contact me anytime if there is any problem. I will do my best to help you. I think a instance complaint (sic) is not a best way to me. Everybody could see this complaint on 2go.
“Pls let me know if you still not get it next week.
“Regards, Huasin”

A week later, still no packet, so I sent a direct email note:
Hello Huasin — Alas, I still have not received the packet of stamps from you. Sorry about the earlier complaint. I didn’t mean to cause a problem. Is this better? – Fred Fiske,107 Fleetwood Lane, Minoa, New York  13116 USA

No response. Two weeks later I sent my next note:
I am disappointed to report that I still have not received the stamp order, which I understand was sent Oct. 8 — and that I have not heard from you, either. Below is a copy of my order, which comes to $30.60.  I have not filed any other complaint with Stamps2Go, and look forward to hearing from you …
Thanks. Fred Fiske
(I attached the list of stamps from the order, which consisted of some old singles from the British Caribbean and Malta, plus some mid-1960s oddities from Sierra Leone.)

Still no answer. Eventually I sent what I suppose will be my final note: Hello? Did you get this message, which I sent days ago? Still waiting to hear from you … – Fred Fiske, Minoa, NY USA

Odd as it may seem, I am rarely “stiffed” by an online seller, and I have made dozens of transactions. While the $30 loss can be absorbed into the great scheme of things, it still stings — and dampens my enthusiasm for online browsing, bidding and buying, at least for a while … (Editor’s note: Not so fast! Stay tuned for the Stamp Bonus feature, “The Prodigal Packet.”)

So I have moved on to other things. The other day, between one thing and another, I happened to take a look at current eBay offerings, and stumbled on what looked like an amazing deal.

The stamp, above, as pictured in the online auction page. Below, an image of the stamp reproduced on a page of my British Africa stamp album.

“Bechuanaland 1887,” read the heading, above the image of an elongated, faded-lilac stamp with a portrait of Queen Victoria. “Price: $79.00.” The stamp included these words in bold, black, curving lines of sans-serif type: “British Bechuanaland” at the top and “Postage and Revenue” at the bottom. In much fainter type bracketing the portrait, under a heavy cork cancel, I could just discern the words “FIVE” and “POUNDS.”

I looked again at the screen. The auction

was due to end in just 15 minutes. To my surprise and puzzlement, there were no other bids. Has this one escaped others’ notice? I would have to think fast. OK, $79 is not a king’s ransom — and look at the prize! The image was a little slanted and out of focus, but I could see no major faults, There was also an image of the back of the stamp, which looked clean. All the perforations seemed in good order. Did the seller not know what he/she was doing? The cancellation did nearly black out the faint lettering of the word “FIVE” — but then again, the clearer letters below spelling “POUNDS” announced a plural denomination, and the set only has a L1 and a L5. This looks like is a great opportunity — a once-in-a-lifetime chance. Better take it. …

Only, wait a sec. What’s the catch? I quickly checked the seller’s “other items” for sale and could find only a dozen offerings — odd overprints from Denmark and Greenland, mostly priced in the $30-70 range. Hmmm. Couldn’t tell where the seller is from — I guess that would be revealed after I buy the stamp. If I don’t go for it, will I kick myself later? If I do and it turns out to be some kind of scam, I would be out $79 (plus $6 for postage), and REALLY soured on the Internet. But I would survive. So why not take the chance?

With a few key strokes, I committed to buying the darn thing. I even offered to up the price to $94, just to keep the whole thing within $100. Tap tap tap and I was launched. Indeed, I was the high bidder (and only bidder) as the seconds ticked away. I watched the numbers go down as I enjoyed the little frisson that accompanies auction bidding. Would another bidder appear in the final seconds? Would there be a pre-emptive attack from an automated auction hawk, stealing away my prize at the very end? …. 6, 5, 4, 3, 2, 1 ….. “You won this auction!”
Immediately came an email from eBay: “You won with a $79.00 bid plus $6 shipping! The next step is to pay. … brikol22 (733) can’t ship the item until you pay for it, so please don’t delay. Once you’ve paid, we will tell brikol2 to ship your item. …” 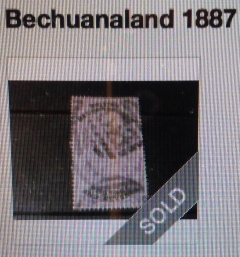 I now discovered, with a sinking feeling, the seller’s hometown: Bryansk, Russian Federation. (How often had I been warned against doing philatelic business with the Russians!) Bryansk (I looked it up) is a city of some 415,000 souls located 235 miles southwest of Moscow. I’m sure there are many fine people living there. Probably some gangsters and brigands, hustlers and hackers, too. I just hoped “brikol2” was one of the fine people — one who didn’t know, or care to know, the true value of this item — in which case, I suppose, I would be taking advantage of him/her. Which kind of puts me in the wrong, I guess. Hmmm. Another alternative: The stamp was stolen by a Russian gangster and is now being tossed into the international market place as a piece of hot philately.

These thoughts galloped through my mind as I debated what to do next. Pay the damn money, get it over with, and see what happens? I called up the payment page, and decided to check brikol2’s track record first. I clicked on “Feedback profile” and learned the seller joined eBay in 2009 and enjoyed 100 percent favorable Feedback over the past year. I examined the list more closely. Comments included, “Prompt service” and “OK.” Most of the comments that followed listed brikol2 as buyer, not seller. That is, most of the couple dozen items on the list involved purchases by brikol2, not stamps he/she was selling. In the half-dozen sales, three involved the same buyer, the same comment (“I have it today, it is very beautiful”), and the same description, “Laos 1951, MNH” (mint, never-hinged). Only the lot numbers were different. One lot sold for $59, the other two for $39. Curious. Possibly completely innocent … hard to see anything disqualifying about it.

Here’s the page from my Bechuanaland collection displaying stamps from the 1887 set. You will notice I have the set complete to the 1 shilling value. I love the lower-value stamps with their uniform portraits that look like bas-relief sculptures in lilac marble. Below is an enlargement of my two highest values from the set — the 1 shilling and the 2/6. My notes say I paid $6.18 for the 1 shilling in 2010, and $19.95 for the 2/6 in 2013.

I activated my PayPal account and was just about to release the funds and be done with it, when I …. hesitated. It was after midnight. Why not sleep on it, I told myself. I can pay just as well in the morning … So I left it at that for the moment and went to bed — with a slightly uneasy feeling. What was I getting myself into here? Would my PayPal account be drained? Would my identity be stolen? Would cyberthieves invade my life and rob me of all I hold dear?
Shame on you, Fred,

for being so suspicious. Just because the seller is a Russian, you jump to all these lugubrious conclusions. How narrow-minded. How provincial. In the morning, you’ll see. Everything will work out. You’ll pay, the stamp will arrive in good time, and it will become a centerpiece of your collection, a remarkable gem amid your estimable Bechuanaland holdings, and a dazzling conversation starter for many a year. Of course, there will always be something of a cloud over the transaction, involving questionable provenance and lack of authentication … Oh well, (yawn) …

Next morning, I woke up with the same uneasy feeling. So directly I went to the computer (since I am retired, I have plenty of time for this sort of thing …).
As soon as I fired up the MacBook, I came across an email message, dated 7 a.m., with the subject line: “Your order was cancelled.”

Huh? Aside from feeling an unexpected wave of relief, combined with a sense of predestination, I was curious. “Hi, Fred M. Fiske,” the note said. “We’re sorry to let you know that brikol2 canceled your order and mentioned the reason as ‘I’m out of stock or the item is damaged.’
“You don’t need to do anything else.”
At the top of the note was another reminder: “You don’t have to do anything else, Fred M. Fiske.”
OK. Doing nothing else would be just fine. But was that the real reason for the cancellation?

The next note came in at 7:03 a.m. — from brikol2.
“Hi,” said the message. “I took out a stamp album and badly injured her ripped in half. Sorry for any inconvenience.
“Andrew”

Hmm. Let’s see if I’ve got this straight: “Andrew” pulled a stamp album off the shelf, sometime in the last few hours, and somehow during that process managed to rip in half a stamp worth upwards of $1,000 — which he had just sold for $79 plus $6 shipping and handling. Is that about right?

Does that sound like a bit of malarkey or what? What’s really going on here? How badly do I want to know? Not really really badly. It’s intriguing, though, to speculate about a Russian schemer figuring out the game was up — perhaps an hour or two after I won the auction lot but neglected to pay my “bargain” price. Would brikol2 have disappeared into the ether once the money was sent? Otherwise, how to prevent Fred M. Fiske from lodging a complaint and ruining brikol2’s “100 percent favorable Feedback rating”? With the order cancelled, I no longer seem to have that option.

So be it. It’s enough that I was relieved of the burden of finding out I was suckered. Alternatively, I also was spared the burden of acquiring by questionable ethical means a stamp with a potentially high value, but with no easy way to certify it is not a “hot” stamp, a fake stamp or phony cancellation. In the end, I paid the best price — nothing! — to learn, or re-learn, that useful old cliche of a lesson: If a deal looks too good to be true, it usually is.

One thought on “BONUS: A Deal too Good to Be True”