The glossy, full-color circular arrived in my mailbox a couple of days ago, and has been sitting front and center on my desk since then. “44 U.S. Stamps,” reads the 48-point come-on headline. “All mint over half-a-century old!” coaxes the second-deck line. The circular displays an array of cheap commemorative stamps — “from the Win the War 40s, Era of Prosperity 50s and the GoGo 60s.” Send in your two dollars — “only $2.00” — and you also receive “our huge 96-page Collector’s Catalog.” Oh, and one more thing: “… plus selections of stamps on 15-day free examination.”

The circular claims the stamps had “an $11 retail value” — though the face value of the stamps came to less than a buck, and most of these dime-a-dozen commemoratives can be bought at face — or even below, in bulk — from sellers’ bins at decent-sized stamp shows, probably online as well.

What really caught my attention was the seller involved: “Kenmore.” That name, and the mailing address in Milford, New Hampshire, kindled an effect in me not unlike that of Marcel Proust on nibbling his madeleine.  This retiree stamp  hobbyist, a veteran decades surfing philatelic seas, suddenly was once again the shy eight-year-old taking his first plunge. Back in 1957, little Freddy carefully filled out the lines printed on the inside of the matchbook cover, stuck it in an envelope, wrote out the address: “Kenmore Stamp Company, 119 West Street, Milford, N.H.”  (no ZIP code in 1957), plus his return address on Livingston Street, Washington, D.C., applied correct postage (3 cents) and dropped the letter in a corner mailbox. (I don’t remember how closely my parents supervised this operation … )

Memory can be tricky, but I don’t believe I ever received back my free stamps Kenmore offered, or for that matter the “selection of stamps on 15-day free examination.” This system of selling stamps on spec, or “approvals,” was a standard procedure;  apparently it still is. The dealer makes it convenient to the collector by sending out a selection of stamps to consider, on approval; the customer may pick and choose, paying only for what he/she buys when returning the rest of the stamps. Not a bad system — though a bit beyond the scope of an eight-year-old, it occurs to me now …  *

Particularly so when destiny intervened, plucking me and my family from our cozy residential roost in Washington, D.C., and depositing us in Dacca, the sprawling and raucous capital city of what was then East Pakistan. My Pa took over as Cultural Information Officer for the U.S. Information Agency, running the American library, Fulbright scholarships and other public diplomacy programs.  Freddy and his twin Nanny were enrolled in the Calvert correspondence school led by an earnest group of Latter-Day Saints missionaries, and life continued in fine fashion.

…  except for the matter of Freddy and the Kenmore Stamp Company. Whether or not my prepubescent self knew what was happening, or not happening — and you’d think at the very least, had I gotten such a spectacular piece of mail at that tender age, it would have made a lasting impression — the matter slipped from  my mind as I absorbed an onslaught of new experiences in the Asian subcontinent.  In short, I apparently forgot all about having sent Kenmore that matchbook cover, as well as my obligation to return whatever stamps sent on approval that I did not choose to buy. The pitch did make it pretty clear, after all: “without any obligation to buy” only extended to the “15-day FREE examination.”

During the first months after our arrival in East Pakistan (now called Bangladesh), a letter duly arrived at our house in the Dhanmundi residential neighborhood of Dacca, addressed to Mr. Frederick Fiske, after traveled through the highways and byways of the U.S. postal service and eventually, the diplomatic mail. The return address announced: Kenmore Stamp Company.

Was I shocked? Thrilled? Apprehensive? Merely puzzled? Little Freddy must have noticed that the thin envelope surely did not include any postage stamps. I wonder if he was able to make sense of the letter’s contents, not yet nine years old. The letter inquired as to the whereabouts of the approval stamps sent previously, whose period of free examination had expired.

Freddy, not having a clue, must have consulted a parent, with whose guidance he drafted a reply letter to the effect that, well, he didn’t have a clue.  The missive  made its way half-around the world to Milford, N.H., conveying a clear message that the successful pursuit of this philatelic debt internationally might be a long shot. And that, one might think, would be that.

Think again. It can’t have been more than three or four months later that another letter arrived in Dhanmundi from West Street in Milford, N.H. This time the tone must have been at least mildly annoyed by my delinquency. Included was an  invoice requesting prompt payment of the entire value of the aforementioned approvals sent for examination — probably a sum total of $15 or so.  (While that amount may seem inconsequential to you, dear reader, enjoying your affluence ion 21st century America, it was out of reach of  this nine-year-old in 1958 in Dacca.)

My parents must not have been paying much attention to this ongoing drama. I  don’t recall they or I did anything about the latest letter and the bill. Perhaps we all hoped that if we did nothing, the problem might solve itself. After all, logic and proportion, not to mention geography, seemed to be in our favor.

Not so fast. There must have been at least two more dunning letters from Kenmore in ensuing months. Maybe as many as six. (Hey, it’s long ago, give me a break!)  I do remember a vague uneasiness about the whole affair — not as though I was one of les miserables stalked by Javert, but still chafing at being targeted by this anonymous, solid-sounding entity called Kenmore.

Of course, the good people at the Kenmore Stamp Company were perfectly within their rights to expect their customer to do the right thing. After all, he filled out the matchbook cover and sent it in, didn’t he? Everyone has the right to try and collect their debts and make a living, right?

Granted. But by this time, it should have been clear that Freddy was just a little guy, now half-a-world away, and that the ill-dated package of stamps — free and on approval — had gone astray somewhere in the sketchier precincts  of the Universal Postal Union. In short, the enforcers at the Kenmore Stamp Company might have realized the folly of pursuing this matter further.

At this point, the Fiske family executed a sneaky maneuver by pulling out of Dacca, after a two-year posting, and returning for several months of home leave.  Freddy and  Nanny, now heading toward 10 years old, enrolled in elementary school in Iowa and went off-grid, as far as the diplomatic mail service was concerned. This moved Freddy beyond the reach of the Kenmore Stamp Company, at least temporarily.  In the fall, the family relocated to Heidelberg, Germany, once again gaining a concrete mailing address: 9 Philosophenweg.

And what do you know? By and by, as sure as day followed dawn, another letter from Kenmore followed Freddy to Heidelberg, up the Heiligenberg along Philosophenweg to No. 9, then up the 76 steps to the doorstep of a bewildered Freddy.  It said something like the following:  Dear Frederick, It has been some time since we heard from you. We have sent repeated notices and invoices reminding you of your obligation to pay for your approvals. If we do not hear from you in 30 days, we may be forced to assign your account to a collection agency for further action. Sincerely yours, Kenmore Stamp Company.”

Would I never be freed of this burden? I must have wondered in words of that sort. At this point a budding sense of self-righteousness, or cussedness, argued not to give in to this unreasonable demand. (Otherwise, why didn’t I just ask a parent pay the darn bill and be free of it?)

At this point, the story kind of peters out. **   I wish there were a snappy, definitive outcome. Another dunning letter or two may have arrived, even one from the collection agency working on behalf of Kenmore. (This should have mildly terrified a 10-year-old with its hints at prosecution and invitations to consider everything from garnishments to incarceration or worse.)  It is faintly possible that Kenmore continued to track me, even after the family moved abruptly from southern Germany to Leopoldville (now Kinshasa), capital of the Congo. At which point, little Freddy now a strapping 14-year-old, would have brushed off any more letters from Kenmore as just a nuisance, like a moth or a gecko.

However, after resurrecting and rehearsing this long-forgotten episode with you, and now sharing it publicly on this blog; and being newly reminded that the Kenmore Stamp Company remains  a going concern up in Milford, N.H.; I experience renewed unease. Could it be that when my time comes and the executor is dividing my estate, a voice will rise from the back of the room: “I represent the Kenmore Stamp Company, and we would like to present our   indictment, and our invoice.”

* A sudden thought just sent me scurrying to my stamp stock drawer: a memory of cellophane envelopes inscribed with short descriptions of stamps once contained therein, over the name, “Kenmore Stamp Company.” Sure enough — I easily found one! The significance of this discovery is as opaque as the yellowing, nearly 60-year-old envelope. Does this mean I got my free stamps and approvals from Kenmore after all? If so, did I ignore the approvals? Alternatively, did I perhaps buy some of those approvals, even send back the rest with my payment? Was there then another package of approvals dispatched from Kenmore? Multiple packages? How long did this go on before Kenmore sent the one that went awry when our family moved to Pakistan? Alas, this story grows more unreliable by the minute. I just hope it’s still at least mildly interesting  … 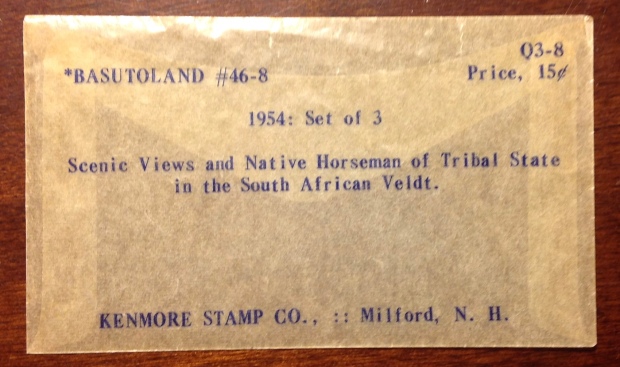 ** In addition to collecting stamps, little Freddy began a daily diary in Dacca, when he was eight, and kept it up until high school and sporadically, beyond. When I get around to reviewing its generally hum-drum contents in coming years, no doubt I will find specifics about the years-long set-to with the Kenmore Stamp Company. Accordingly, I shall endeavor to keep this record updated with my findings.